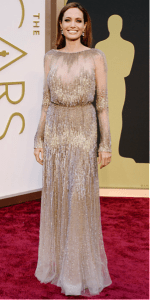 Actress, director, writer, mother, and humanitarian; is there anything Angelina Jolie doesn’t do? From her work as an U.N. Goodwill Ambassador to her countless awards and recognitions in the film industry, Jolie is certainly well known and the beautiful actress recently opened up about life after her double mastectomy.
In 2007, Jolie’s mother, Marcheline Bertrand, died from cancer at the age of 56. Jolie revealed in a 2013 essay in the New York Times, “Once I knew that this was my reality, I decided to be proactive and to minimize the risk as much as I could. I made the decision to have a preventative double mastectomy.” After her mother’s death, Jolie was tested and found that she carried the fault gene, BRCA1. This meant that, genetically speaking, she was at high risk for both breast and ovarian cancer. Jolie’s doctors had estimated that she had an 87% risk of breast cancer and a 50% risk of ovarian cancer.
Jolie had completed nearly three months of procedures in February of 2013. Following that she underwent breast reconstruction surgery. Most recently, Jolie revealed, “There’s still another surgery to have, which I haven’t yet. I’ll, you know, I’ll get advice from all these wonderful people who I’ve been talking to, to get through that next stage.” Jolie shares that it is these people who have helped her get through the ordeal, “I was very, very moved by all the support and kindness from so many people. I’m great! I’m very happy I made the decision. I was very fortunate to have great doctors and very, very fortunate to have a good recovery and have a project like ‘Unbroken’ to have something to be really focused on, to be getting healthy for, and to be able to just get right back to work.”
There is no doubt that Jolie’s brave determination and honesty has brought publicity to the sensitive issue, however, according to Jolie it also offered her the chance to connect to other people who are going through the same thing. Jolie explains, “I feel very, very close – much closer- to other women, and women who are going through the same thing. Wherever I go, usually I run into women and we talk about health issues, women’s issues, breast cancer, ovarian cancer.” Jolie reveals that it isn’t only people who share her position that she connects with, “I’ve talked to men about their daughters’ and wives’ health. It makes me feel closer to other people who deal with the same things and have either lost their parents or are considering surgeries or wondering about their children.”
With her double mastectomy behind her, Jolie has been back to work in full force. Her upcoming film, Maleficent, is Disney’s adaptation of Sleeping Beauty. Jolie plays the title role and reveals that her daughter, Vivienne Jolie Pitt, also has a cameo role in the film as young Princess Aurora. Jolie explains, “We think it’s fun for our kids to have cameos and join us on set, but not to be actors. That’s not our goal for Brad and I at all. But the other 3- and 4-year-old (actors) wouldn’t come near me. It had to be a child that liked me and wasn’t afraid of my horns and my eyes and my claws. So it had to be Viv.” Maleficent is set to hit theatres on May 30, 2014. 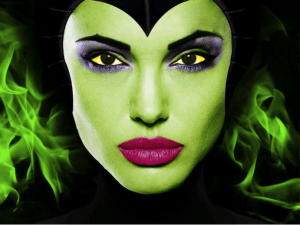