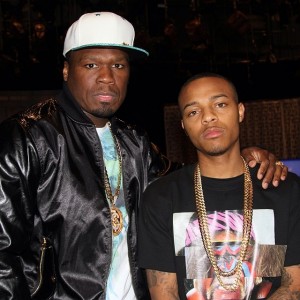 The internet has been buzzing since an Instagram picture of 50 Cent’s son, Marquise graduating from high school and in the caption he slanders his father for not attending the once in a lifetime event. The initial reports from TMZ was that 50 skipped the event so the SMS honcho decided to clear the air on BET’s “106 and Park”, while also promoting his new album “Animal Ambition”.
50 Cent first cleared up that not only was he not sent an invitation to the ceremony, he was also unaware of it. He also said that his contentious relationship with Marquise’s mother Shaniqua Tompkins, clouds his dealings with his oldest son. He also accused his former flame of using the gossip sites to damage his own personal relationships.
“I don’t need an explanation,” he told the host of 106. “I don’t really. I think that my personal life, portions of it are actually supposed to be personal and my actual life as an entertainer is a whole ‘nother life. My son, I hadn’t received an invitation to it and when he graduated, I was in Budapest [doing a movie]. I think at some points – the reason why it comes out is because his mom’s going to TMZ. Like, that relationship – I wish she’d find someone so she would leave me alone.”
50 also added that he was shooting a movie at the time the event took place.

Can You Work Out Shirtless With A Dadbod?!