50 Cent:Jay Z is the most overrated superstar in Hip Hop 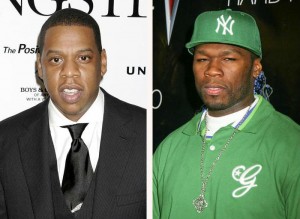 50 Cent has continued to make his publicity rounds, promoting his hit TV show “Power” and his

new album, “Animal Ambition”. He stopped by the Bravo show “Watch What Happens Live” with

Andy Cohen to chop it up about his album, the G-Unit reunion. Fif participated in a game called

50 was very candid with his answers.

When asked who he felt who was the most overrated in Hip Hop, 50 cent did not hesitating

in naming Jay Z. He even quoted Hov’s bars as a reference saying that he said “I’d rather be

Check out the interview.

Drake Popping off in the streets (China Town Style) TMZ