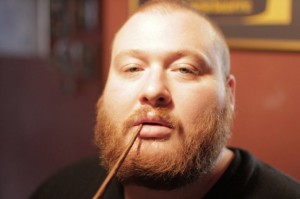 Action Bronson has built up a reputation as a new age Ghost Face for the modern generation. Here is a word of advice if you are attending a Bronson concert: Never Ever set foot on stage. There is now a list of fans who have felt the wrath of not Bronson’s security guards but Action Bronson himself.
The list just got longer this week when a fan at a North Carolina show felt brave enough to come across the rotund rapper’s stage and quickly learned that it was the wrong thing to do. The fan quickly felt the force of an overhand right that sent the overzealous fan sprawling into the crowd.
The rapper has had similar incidents in Seattle, where he threw a fan off stage and also in Boston where he body slammed a fan. Bronson has also fought with his own security in Portland, Oregon.

Justin Bieber — I Play Second Banana to My Pastor!!!