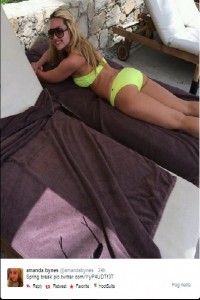 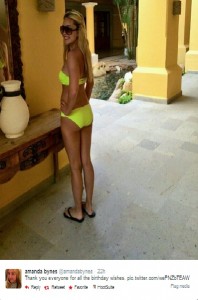 Recovering star Amanda Bynes, who had an extended stay in a rehab for

birthday and spring break from the Fashion Institute of Design and Merchandise,

where she enrolled in December, with parents Lynn and Rick Bynes. The family

One of the pictures, on which Amanda smiles and shows curvy backside and

slimmer figure, is captioned “Thank you everyone for the birthday wishes”.

Bynes has a history of really crazy tweets! On March 21, 2013 she showed

Obama and Michelle Obama are ugly”, even though in April 2012 she famously

reached out to the President, after she was arrested for allegedly driving under

the influence and sideswiping a police car. Back then she tweeted to Obama

“I don’t drink. Please fire the cop who arrested me. I also don’t hit and run. The

studying at @FIDM but I want to say I love you to my fans! Xoxo Amanda.”

For the latest entertainment news and celebrity gossip follow Oowie.TV on