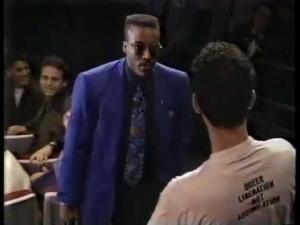 It has been almost 20 years since the original incident happen yet it remains fresh in the mind of one of the new school pioneers of late night talk shows, Arsenio Hall, when a couple of guests who called themselves the “Queer Nation” objected to a perceived lack of gay guest on the show.

Arsenio recently sat down with Vladtv.com to get the facts straight on the incident and also reveal that he received death threats because of it. The late night TV show host said he had the option of editing that footage out but decided to keep it because he wanted to confront the issue head on.
He also stated that he would never discriminate because of sexual preference and that he had numerous gay guests on the show. He said that “no one was more important to the gay community” during the 90’s than Arsenio Hall.

Check out the videos in the appropriate boxes.

Rihanna and Drake break up again!