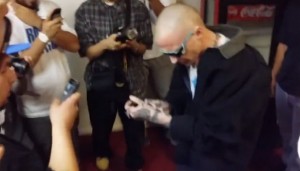 days. Props are now customary in ways of exposing your opponent to gain a psychological edge. Also in

his lyrics. Around the 9:50 mark it is apparent that this is a mismatch when all of a sudden Ron pulls out

a needle and injects himself.

The crowd instead of stopping the battle cheers him on. One person even said he needed his “special

powers,” as they allowed a man obviously beaten by life to self-destruct. Check out the video in the

The future is here…SEX ROBOTS!!!