Big Thrills, Small Screen – Are You Ready for Friday the 13th 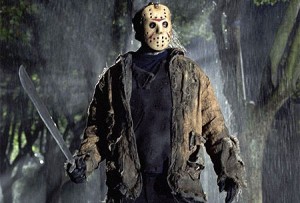 Who doesn’t love Jason -The guy who slices and slashes

everyone who comes his way for apparently no reason at all.

Yes, that guy! Don’t you just hate when you have to wait years

before he strikes again? Well, not anymore! Because Jason will

now be paying us a visit almost every other week. Sean S.

Cunningham, the genius behind the original Jason movie leaves

television series, for which he will be one of the executive

Of course, this won’t be Jason’s TV debut as some of us are actually unfortunate enough to remember

the 1980s series. While the series was produced by the same studio that made the Jason slashers

for the big screen, it wasn’t as good as it should have been. The worst part was, there was literally

no connection to the Jason’s origins or his story at all. This time, we are promised something better.

Although they haven’t even scribbled the script yet, the plan is to keep it all about the Crystal Lake, and

how it goes on to become Jason Voorhees’ humble abode.

According to the sources, the series will be set in present and reveal a lot about Jason’s family through

flashbacks. That is pretty much how most of the TV reboots work these days. It may be a hit or miss,

but most of us are actually betting on the former. Why so? Based on the rumors we have heard so far,

Cunningham is not the only dependable name on the panel. Teaming him on this project are some

of the most reputable names in Hollywood including the scriptwriter Bill Basso and Jordu Schell. The

former is known for his work on the Terminator 2 and first two Jurassic Park movies. As for Schell, his

credits include the likes of Avatar and 300.

will actually go under production. However, it is expected to go on-air in 2015. One of the best things we

know so far is the fact that the series will be created not only for the avid fans, but also to attract newer

audience. So, if you haven’t met Jason yet, better get prepared for one of the most terrifying experience

Hollywood fans have ever known!

is likely to be an hour-long series. There is no confirmed news regarding when the show

Clooney is Officially off the Market