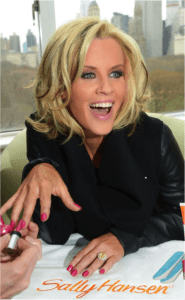 When It Comes to Engagement Rings, A-listers are All Up for Bigger and Bolder this Year
Engagement, wedding, or divorce, it is hard for the celebs to keep their matrimonial affairs hidden from the public eye, but then, do they ever intend to?
It may not be true for all of them but celebrities seem to love making headlines, especially when it concerns their wedding gown, post-divorce autobiography, or an engagement ring. Recently engaged, Jenny McCarthy seems to be on the top of that list right now. Former Playboy model, 41 years old Jenny got engaged to her ‘The View’ co-host Donnie Wahlberg and revealed the news along with her engagement ring, which was hard to ignore anyway.
The square cut yellow sapphire ring bordered with small white diamonds may be huge but it is no way hideous. The delicate cut and the elegant hue gives it a unique and elegant look despite the extravagance. And we’ll be seeing the bling for the whole spring as the star seems to be planning an August wedding.
It won’t be McCarthy’s first walk down the aisle. She was previously married to director John Asher, a commitment that didn’t prove to be pleasant for either of them. After her divorce, McCarthy said she might not have the courage to marry anyone ever again. That was until Wahlberg somehow changed her mind. The couple started dating publically last summer and McCarthy admitted on the Bethenny Frankel’s talk show that she would say yes if he ever pops the big question, which Wahlberg did with the help of Jenny McCarthy’s 11 year old son, Evan.
Coming back to the gigantic ring, it was not the only big bling we have seen lately. Earlier this year, we were all mesmerized by the huge diamond ring on Mila Kunis’ finger. It may not be extravagant, but it definitely was huge enough to attract enough airtime during last week’s MTV Awards. Not letting the ladies lead, the not-so-young lad Johnny Depp is also making quite a buzz with his ‘chick’s ring’. The reason for this bizarre display of affection, says Depp, is the size of the ring, which is too big for his lady Amber Heard.
However, the lady who takes the cake for the most mesmerizing ring on her finger is Mary-Kate Olsen who received a Vintage £48,000 Cartier engagement ring from her banker beau Olivier Sarkozy.

Calling out tricks at the Vans BMX skatepark

Lil Scappy: 50 Cent is weathly as a Goon

The Most Memorable Celebrity Cry Faces