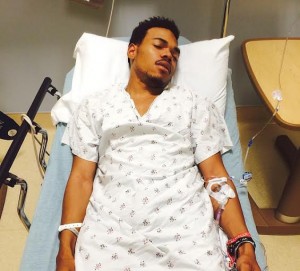 a hospital a few hours before his scheduled performance for the second week at Coachella. The Chicago

MC, who performed at the festival the week prior and also brought out Justin Bieber, indicated that he

was feeling under the weather after a performance at Brooklyn Bowl in Las Vegas that Friday.

He also indicated to his fans via social media that he had two days to feel better, but hope came

crashing down when a photo was put on his Instagram that the rapper was hospitalized. The post was

perform in a stream of messages. No reason for the hospitalization has been officially given.

Chance the Rapper, born Chancelor Bennett has emerged after his first two mixtapes as one of the