CNN does an exclusive on the Clipse titled “Brother’s Keeper” 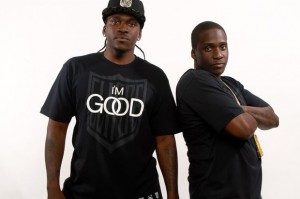 tales of drug dealing and inner city life. We have been entertained by them and always wondered what

the true reason that Malice, who now goes by “No Malice” and Pusha T are no longer a united front in

Bill Weir headed down to Virginia, to speak with both men in the group, albeit separately, and find

out more about their background and what caused the split. Both were admittedly candid, denying no

details from a sordid past that included the selling of cocaine.

acclaim. They began to differ in the journeys through fame, while Pusha enjoyed it the married Mal was

having a hard time coping with his new life style with led to his turn to religion.

While Pusha indicated that he is all for a new Clipse album, No Malice is steadfast in his demand that he

will not rap that way or purport those stereotypes in his lyrics.

“I came to him and I was like, Man, I got these ideas; I got these beats I want you to check out. And he

was like, I’m not doing another Clipse album right now. Wow. That was hard,” Pusha told the veteran

Selena Gomez – Hands To Myself