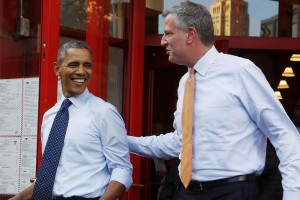 While the nation awaits the NBA championship series to commence, a New Yorker with an Instagram

account issued a challenge that was heard from Gracie Mansion to the White House. Straphanger Alvin

on the social media site throwing down the gauntlet.

“So I get on the J train, I’m heading downtown and guess who I happen to see here? My mayor! I think

he can beat Obama. This is his official challenge. Obama, my mayor is going to play you one-on-one at

ball. Do you accept?” Javier said.

The mayor thought that the young man had come up with a great thought and gave credit.

“Alvin, now that you have brought up this idea, I think it’s a great idea,” he said.

playing with the likes of professionals such as Chris Duhon. Age wouldn’t be much of a factor but de

Blasio does have a height advantage over the president.

Jimmy Fallon with The Roots: Desire

Denizens of the Petrified Dunes

The Kills – Doing It To Death