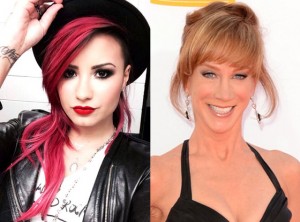 It seems pop star Demi Lovato and comedienne Kathy Griffin are playing with words of a different kind. The

two stars are right now in the midst of a bitter war of words. Their battleground is the Twitter. It all started

when Kathy Griffin named Lovato as the “biggest douche celebrity” she has ever met.

Kathy Griffin Starts it All

should calm down about “Lady Gaga getting barfed on.” For the uninitiated, during her concert at the recently-
concluded SXSW Music Festival in Austin, Lady Gaga had her friend Millie Brown gulp down some greenish

liquid, stick her finger down her throat, and throw up the substance all over the singer.

and make a spectacle out of eating disorders. In this context, it is worth noting that the former X Factor judge

had once struggled with eating disorders and had been treated for her conditions. So it is not surprising to many

that she did not find Lady Gaga’s antics “cool” or “artsy”.

sticking out along with a cheeky caption, ‘only a “douche” to people I can’t stand.’ She, however, took down

Demi Lovato’s Fans Carry on the Fight with Kathy Griffin

If the very public Twitter spat between Demi Lovato and Kathy Griffin was not enough, the former’s fans

too joined in the fray. Soon after the Twitter war broke out between Lovato and Griffin, Lovato’s fans started

bombarding Griffin with death threats. For instance, one threat read, “#KATHY, I’m going to stick you in the

oven and kill you…” Kathy Griffin did not reply to these threats.

However, Lovato was very upset by the doings of her fans and issued a pacifying tweet to calm them. She was

very direct in pointing out to them that some of their threats are nothing short of cyber-bullying and can “really,

REALLY hurt people.” She signed off her lengthy tweet by proclaiming her love for her fans and thanking

them for “always having my back…”

The Twitterverse seems to be churning out quite some drama these days!

Oprah Winfrey to tour the US in the Fall

Apple to partner with Kobe Bryant and others to test iWatch