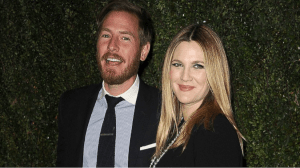 On Tuesday, April 22, Drew Barrymore and her husband Will Kopelman welcomed their new baby into the world. The couple shared in a statement, “Happy to announce that today we are the proud parents of our second daughter, Frankie Barrymore Kopelman. Olive has a new little sister, and everyone is healthy and happy!”
The proud parents were married in June of 2012 and welcomed their first daughter, Olive, a few months later on September 26, 2012. It was shortly after Olive’s first birthday that the actress, 39, and her art consultant husband made the happy announcement that they were expecting.

Barrymore reveals that she worked hard to prepare Olive for her new big sister duties, “I read her a lot of books. She loves books! That’s her favorite thing in the world, books. She is 14 months so it’s as much as she can grasp, but she definitely gets it. She points to my stomach and says baby. How cool is that?”

The radiant actress grew up in the spotlight and her wild childhood was well documented. The former child star entered rehab for alcohol and drug abuse at the tender age of 13 and by age 15 she was emancipated from her parents. The star even graced the cover of Playboy at the age of 19. However, Barrymore feels that her history will help her raise her children, “My life choices are not supposed to be the gateway to somebody else’s. That’s my journey.”

Barrymore reveals, “The best kind of parent you can be is to lead by example. Whatever I’ve experienced in my life is part of my story, and I’m proud of that. But it’s someone who wakes up early, works all day, believes in charitable work, business-minded, diligent, accountable, problem-solving…I’m so much about school, consistency and tradition.”

While Barrymore is a successful actress and business women, she admits that her priorities are shifting as her family grows, “It used to be work first and now it’s life first. So even though I’m doing a lot, there’s a lot of things that have slowed down.” She continues, “I don’t make that many movies anymore. I’m not really producing right now. And I’m trying to do jobs where I can work from home or be at home by dinnertime if I do have to go out to meetings. You just sort of change your life.”