No it ain’t the Oscars! 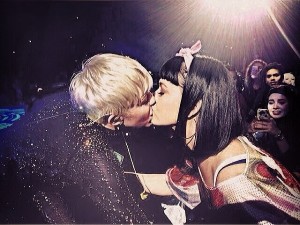 (We dish all the things you pretend not to care about, but read secretly under your blankey with a flashlight)

The claws are out and the girls take it to the streets, and by streets I mean twitter… It all started at a recent Miley Cyrus’s concert, Katy was summoned near the stage by Miley pulled and in for a kiss, which she obliged until Miley slipped her that infamous tongue, to which Katy IkissedagirlandIdidntlikeit Perry recoiled in disgust. Miley later tweeted “Don’t act like you didn’t like it.” Katy responded on a television show in London saying “God knows where that tongue has been”

Cyrus tweeted “Girl if ur worried abt where tongues have been good thing ur ex boo is ur EX BOO cause we ALL know where THAT tongue been.”

Seems to me Katy’s response was a bit exaggerated and also oxy moronic considering her claim to fame first single. Sure one has the right to not want a random tongue pushed forcibly down ones throat… but what did you think would happen by going onstage to kiss MILEY CYRUS?!

Guilty of fraudulence, if you can’t stand the heat…

Check out the dumbest accidents on wheels.

LeBron James asked his kids for permission to return to Cleveland