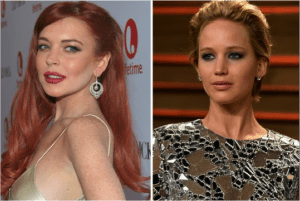 Here’s the latest reason why LiLo HATES JLaw!
Although Jennifer Lawrence appears to be holding tight to her role as America’s sweetheart, there is one person who is not a fan: Lindsay Lohan. Lohan’s recent bashing of Lawrence appears to be nothing more than pure jealousy. Not only does Lawrence have an enviable career, but she also has starring movie roles in successful films, loving and supportive family and friends, a likeable personality, and a private and stable relationship with actor Nicolas Hoult. This seems to be the most recent reason for Lohan’s dislike. According to sources, back in 2010 Lohan was pursuing Hoult and he denied her. Sources reveal that she was calling him non-stop and would not leave him alone. Eventually, Hoult had to tell her to stop contacting him.
After an interview with Lohan, an article in Kode Magazine revealed, “… (Lohan) sauntered off into the opposite side of the room as the conversation then moves to America’s current sweetheart, Jennifer Lawrence. Her feelings towards her infamous stumble at the ceremony’s red carpet is pretty evident. ‘She’s so fake and I’m sorry I’m not going to (expletive) for roles.’” However, Lohan’s rep has said that the article in Kode had been fabricated and that Lohan did not do an interview with the magazine, but had emailed her Q&A. But, there is no doubt that Lohan, 27, has some resentment towards the Hunger Games star. Lohan been very vocal about her hope to one day win an Oscar. Lawrence, 23, already won an Academy Award for her portrayal of the mentally unstable Tiffany in the 2012 film, Silver Lining Playbook. Further, Lawrence has been nominated for an Oscar three times.
While Lohan obviously has no problem insinuating that Lawrence sleeps with casting directors to gain starring roles, many see this as just another one of Lohan’s calls for attention. According to the media, on Lohan’s OWN documentary series, she revealed that she had suffered a miscarriage, however reports suggest that this is false and that she is used it as an attempt to gain attention. Much like her recent release of a list of her sexual conquests, this supposedly includes 36 well-known stars like Zac Efron, Justin Timberlake and Ashton Kutcher.
For now, Lohan seems to be reprising her most well-known role as a mean girl.
Video Link: http://on.aol.com/video/lindsay-lohan-dislikes-jlaw-because-of-nicholas-hoult–518223679

Ja Rule: I Sold Drugs to My Friend’s Parents As a Kid