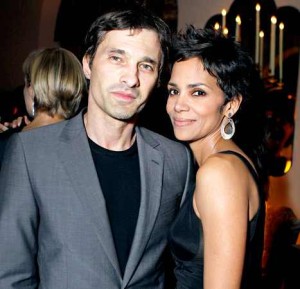 Halle Berry and husband Olivier Martinez are supposedly on the rocks following reports from the New York Daily News. According to sources from [email protected], the two have drifted apart due to hectic work schedules.
The pair marriage was cemented in Paris in 2012 are now on call at their respective jobs in Hollywood. Berry has had a hectic schedule with her role in the new X-Men movie and her CBS series, “Extant” and Martinez has had a guest role on the ABC hit “Revenge”.
The couple have a child together, a son named Maceo and Berry has a daughter from a previous relationship, Nahla.
The actresses love life has been under constant scrutiny. She first married David Justice and divorced him after claims of abuse surfaced in 1997. Berry the remarried in 2001 to singer Eric Benet, until rumors of infidelity quickly dissolved that union.
Her last relationship to model Gabriel Aubry ended contentiously as Aubry openly petitioned for custody of their daughter. The fracas leaked into her new relationship as Martinez and Aubry were involved in a physical confrontation that left both with bruises.
Berry also has been involved in controversy with her new movie. She was supposed to be cut out of all scenes which shown that she was visibly pregnant. Reportedly they have left only one scene where she has a speaking role in it.
By Kyle Bostic

Selena and Justin On Again?

Courtney Love – you know my name