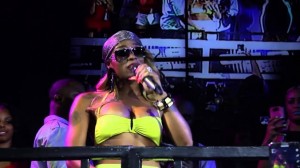 Joseline Hernandez, the self proclaimed “Puerto Rican Princess,” has been in the gossip rags

recently for alot of reasons. Too bad the first time we’ve heard her music is was underlined by a

Hernandez, who took shots at other reality stars such as Draya from Basketball wives and Mimi

from her own show “Love and Hip Hop: Atlanta” rapped verses that weren’t well received from

the crowd. The smattering turned into a chorus of boos when Hernandez’s boyfriend Stevie J

showed up to escort the reality star off stage.