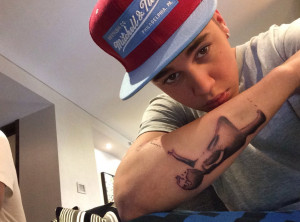 It seems that Justin Bieber just cannot stay away from controversy. If the teen pop sensation is not courting

possessing illegal drugs) and failing to appear in court, then he is in the news for throwing eggs at his neighbor’s

house. This kid has some knack for stirring controversy, so much so that he managed to outrage many even

when he attained his new tattoo recently.

Justin Bieber has got a new tattoo that looks strikingly similar to a much-loved work by Banksy, a street artist

from Bristol. Bieber shared a photograph of his tattoo on Shots, and it immediately had people wondering if

it was a copy of the Balloon Girl by Banksy. Bieber’s tattoo shows a little girl reaching out for a heart-shaped

balloon. He capped it with a caption that read, “Don’t let your dreams float away.”

Meanwhile, Banksy has stirred more controversy when he re-posted Bieber’s photograph on Instagram and

On the other hand, Bieber’s tattoo artist, the Canadian Glen Hartless, has justified his artwork on Facebook. He

posted a photograph of himself working on Bieber’s arm during a late-night tattooing session and wrote, “We

weren’t after a carbon copy rip off. More subtle imagery.”

It seems that Justin Bieber has transformed himself into a live canvas for artists. He had started getting tattoos

from the age of 16. He is now 20 and has more than 20 tattoos imprinted on various parts of his body. His more

famous tattoos include that of a compass on his upper arm, the word “Believe” on his left forearm, a portrait of

Jesus Christ on his left calf, and a treble clef behind his left ear. But probably no tattoo has garnered as much

controversy as his latest body art.

Justin Bieber may have legions of fans who swoon over his every act and antic, but there are also countless

more who are not amused by this kid’s arrogance and devil-may-care attitude. They are clearly not impressed

by the youngster’s latest act. In fact, various social media sites are abuzz with angry comments from art lovers.

It seems that this time Bieber may not have had a brush-off with law, but has managed to hurt the sentiments of

many around the world.