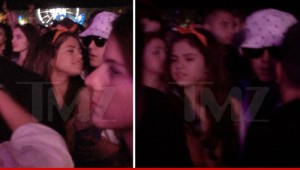 the Coachella music festival during Jhene Aiko’s set. The couple was holding hands and getting cozy

to each other, according to eyewitnesses, while earlier that day they were holding hands looking

comfortable in each other’s company.

Bieber was wearing a white bucket hat, bandana scarf and a black t-shirt, while Selena was looking

extra sweet with a big red ribbon in her hair. Jelena also made their way to Calvin Harris’ performance

later that night, again whispering to each other, getting extra close and dancing, but this time

Justin Bieber made a surprise appearance in Indio, California’s famous festival during Chance The

Rapper’s performance. Watch the video from his gig on Oowie.TV.

Tinashe Performs ‘2 On’ Live At The Viper Room