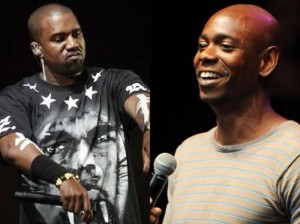 doing stand-up regularly. Among the interesting tidbits that he shared during his press tour was about

a young Kanye West, who didn’t have a record out but was still full of the boastful braggadocio that we

have come to expect from Kanye.

So it was no surprise that Chappelle had the newly married Mr. West as a surprise guest at his concert.

West, who is a phenomenal performer, gave the crowd what it wanted by doing a set of hits such as

“Jesus Walks”, “New Slaves” and “Gold Digger”. Though no electronic devices were allowed, footage of

the performance has leaked online.

Robin Thicke Get Her Back official video