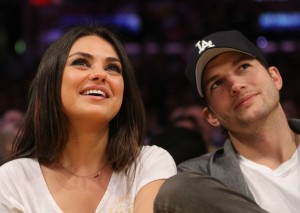 Awww! Hollywood’s cutest couple is at it again!

Ashton Kutcher, 36, from the hit series Two and a

from Kunis’ father, Mark. A source explained, “He

talked with Mila’s dad around Christmastime. He

traditional. This is the real thing for him and he

wants to do it right.”

The couple’s engagement was revealed to the public in late February, when Kunis was spotted wearing

a simple diamond engagement ring. According to a friend of the couple, “It’s a simple band with a round

diamond. No baguettes, no insets. It’s not ostentatious, like a Kim Kardashian ring. She doesn’t need a

security team with her to wear it. It’s a lot like her and Ashton.” The happy couple has stayed relatively

of the couple reveal it won’t be long, “They don’t want to wait. This relationship started on solid ground

and everything is working out. They are in it for the long haul, truly.”

The couple starred together as on-screen couple Jackie and Kelso on That ‘70s Show, which ran from

out and about; vacationing together and sharing lots of PDA. In September, a source shared, “They are

clearly very much in love, in tune with each other and so comfortable. In some ways, it’s like they’re