Lady Gaga Provokes Outrage with Her Performance at the SXSW Festival 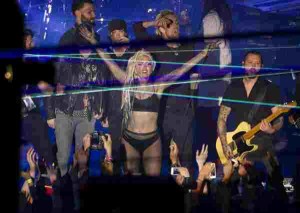 Pop singer Lady Gaga is more famous (read: infamous) for her outrageous attires and bizarre antics than her crooning talents. But her performance at the South By South West (SXSW) Music Festival in Austin, Texas, surpassed even her standards of notoriety. In fact, it left many in the audience sick.
The Show that Shocked Spectators
Lady Gaga had worn a meat dress at the MTV Video Music Awards of 2010. The singer had also stripped down on stage and performed in her itsy-bitsy lingerie during one concert. But she has never been vomited onon stage. That’s what happened at the SXSW Music Festival during the singer’s Swine performance.
During this performance, Lady Gaga was joined on stage by Millie Brown. She is a vomit painter. For those of you who are rolling their eyes (in disgust or wonder), Brown gulps down copious amounts of colored liquid and then sticks her fingers down her throat. She vomits all over a canvas, and hey presto (and fools by this filth and put it in their home!)! You have artwork here. At Lady Gaga’s Austin performance, the singer was Brown’s canvas. Millie Brown downed a large jug of some neon-colored liquid and in front of a horrified audience, vomited all over Lady Gaga.
And they did an encore too!
As the song continued, Lady Gaga and Millie Brown rode a mechanical pig. And as the contraption rocked back and forth, Brown was apparently motion sick and puked all over Lady Gaga once more. The singer, however, did not mind because she continued her performance drenched in Brown’s vomit!
It is a wonder nobody else in the audience threw up.
Lady Gaga Accused of Encouraging Bulimia
It seems that Lady Gaga makes headlines both on- and off-stage. Before taking the stage at the SXSW Music Festival, the singer appeared onJimmy Kimmel Live! Uncharacteristically for her, she was fully robed, in a dress made of coffee filters. When asked about her conservative dress, she replied she was covering up all the weight she had put on gorging on Texas-styled BBQ during the SXSW Music Festival.
Her “weight” statement coupled with the suggestive vomit act during her performance got many idiots up in arms against the singer. They accused her of encouraging bulimia amongst impressionable young girls. What is wrong with being shape? Fans of the singer wonder how she will react to this accusation. But then, Lady Gaga is not new to criticism either, and she has always been nonchalant about them.
Hey, her concerts may be pathetic and disgusting but “Poker Face” and other are songs that she has done are spectacular.