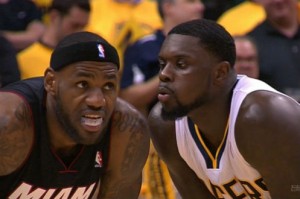 If there has been one person who has been a constant irritant to the defending champion Miami Heat, it

has got to be Lance Stephenson. Whether engaging in a war of words with LeBron James or questioning

the effectiveness of Dwayne Wade’s knees, Stephenson has managed to be a thorn in the side of not

only the NBA’s best player but the Heat in general.

Stephenson, seemingly sensing that his team was on the brink of elimination, raised his standard

nuisance level beyond ten in the Pacers 93 – 90 win over the Heat. During the game, the talented two

Lance wasn’t done yet. During a stoppage in play, the Brooklyn born player managed to blow in Lebron

James’s ear, earning a priceless reaction from the 4-time Most Valuable Player. James, who had his

worst game of the series said this about Stephenson’s antics, “All the extra, whatever, that Lance wants

to do, I don’t really care about that.”

Drifting through Sarajevo with Abdo Feghali