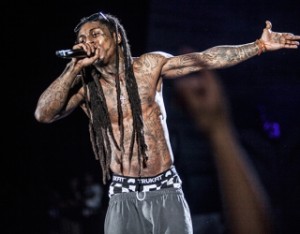 Lil Wayne’s is currently working on his highly anticipated “Carter 5” album but that hasn’t stopped speculation on his future projects. Even though Wayne has indicated that the last installment of the Carter series will most likely be his final solo project he did not rule out a possible return.
While talking to MTV news this week, the artist known as “Tunechi” revealed that he may come back if paid the lucrative sum of approximately $25 – $30 million. Indicating that he was serious, Wayne reiterated, “I didn’t smile when I said it.”
Though Wayne may be retiring from a solo career he let it be known that he wouldn’t be adverse to collaborative efforts such as the YMCMB project “Rise of an Empire.” That would also leave open to future albums with such Young Money stars like Nicky Minaj and Drake.
“I personally plan on this being my final solo album, yes and it’s definitely the final Carter album. It’s the final Carter album. It’s stopping at five,” the multi Grammy nominee stated. “The reason being is because the way I’m working on this album, to me, it seems like it will be impossible for me to work this hard again for anything else.”

Wayne wouldn’t be the first to unretire due to economics pulling him back in. Jay Z’s “Kingdom Come” project was funded by ads with Microsoft and Budweiser.

Talk About the New Tiger Lily!

Cooking At Home Is Faster Than Eating Out