Things quickly tensed up at a pre-party for the BET Awards this Sunday, as former flames Floyd Mayweather and Shantel Jackson ran into each other. “Ms. Jackson” was doing an interview for TMZ, explaining the origin of her “Ms. Jackson” moniker. She said it was giving to her by her “ex-significant other” and “she ran with it”.
A small time later, Her “ex-significant other”, Floyd Mayweather walked in the building escorted by his new lady “Bad” Medina. Surrounded by security, Floyd looked in the direction of “Ms. Jackson” and told his new lady to “Say Hello”. After his former flame did not respond to his overtures, he soon left the premises.
When making his way to his Bentley, TMZ reporters asked was he leaving because of “Ms. Jackson’s” presence. He responded, “Always keep it positive.” 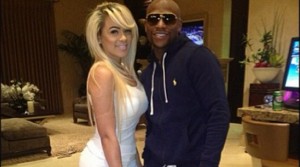 Drake Popping off in the streets (China Town Style) TMZ

Is the Jackson 5 family feud – Again