Mick Jagger Deals with the Death of L’Wren Scott 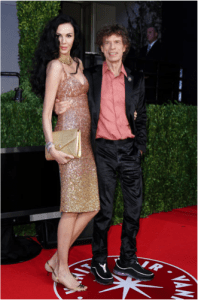 By: Stephanie Hacker
While the fashion world is still reeling from the recent death of designer L’Wren Scott, things hit a little closer to home for the members of The Rolling Stones. Mick Jagger, of The Rolling Stones, and L’Wren Scott were a longtime couple and Jagger is doing his best to reconcile the recent loss. While Jagger is trying to deal with Scott’s death, he is getting plenty of support from his band mates. Jagger posted on his Facebook page on March 18th, “I am still struggling to understand how my lover and best friend could end her life in this tragic way. We spent many wonderful years together and made a great life for ourselves.”
Scott, 49, was found dead by her assistant on Monday morning, March 17th. According to police on the scene, Scott was found in her Manhattan apartment where she was kneeling with a scarf around her neck, tied to the handle of a French door. So far, no note has been found. On March 19th, the New York City medical examiner’s office officially ruled that Scott’s death was suicide. Julie Bolcer, a spokeswoman for the NYC medical examiner confirms that the autopsy completed on Scott’s body verifies that the designer had died of hanging.
“This is such terrible news, and right now the important this is that we are pulling together to offer Mick our support and help him through this sad time,” shares band member Ronnie Wood. There is no doubt that as Jagger attempts to deal with this tragedy, his fellow Stones are helping him. The band has been through a lot of success and tragedy over the years, and is used to turning to one another for support. Keith Richards lends his support and reveals, “No one saw this coming. Mick’s always been my soul brother and we love him. We’re as thick as thieves, and we’re all feeling for the man.”
March 18th was supposed to mark the beginning of the band’s Australian and New Zealand leg of their 14 ON FIRE tour; however the tour has since been postponed due to Scott’s recent death. Stones’ drummer Charlie Watts explains, “Needless to say, we are all completely shocked. Our first thought is to support Mick at this awful time. We intend to come back to Australia and New Zealand as soon as possible.”

‘Pan’ Can Finally Take Off with its Complete Crew