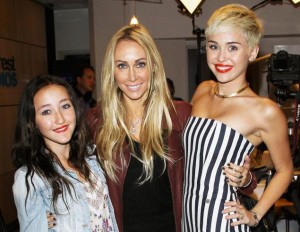 this morning on way to New Orleans. Thankfully no injuries were reported from the accident.

Her younger sibling Noah, shared photos and videos of the accident, thanking a higher

power for keeping everyone safe.

This was the second time a Cyrus bus has been involved in an accident. In 2009, a Cyrus

bus crashed outside of Richmond, Virginia on I-85. There was one fatality in the accident

the driver, whose life was tragically ended.

As of right now, no tour dates have been cancelled for her Bangerz tour. The tour was

slated to be at the Smoothie King Center in New Orleans tonight, then the Tampa Bay

Miley Cyrus wasn’t on the bus at the time.

Category: Celebrity Blog, Most Embarrassing Moments, Most Recent
Next

Dr. Boyce Watkins: Charlamagne is the Eric Cartman of Hip-Hop