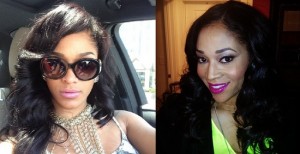 rounds of intercourse with her fiancee Nikko Smith. The release of a trailer has prompted an

skills by saying “if you going to f*** on camera at least be a freak not a boring 45 year-old lady.

Faust, ever the opportunist, shot back that Hernandez is just jealous that she is not in the

spotlight this week, by saying “She’s mad because there’s is no shine on her.”

The two began quarrelling season 1 when Faust then boyfriend, Stevie J was having an affair

with Ms. Hernandez. The quarrel has spilled over during the season even though the two former

cheaters are now dating and Faust is currently engaged to Smith.