The NBA in a moment that just showed sheer class took time out from its NBA draft to honor a young man who because a genetic disease was no longer able to play basketball. Adam Silver used the time between the 15th and 16th picks to say that the NBA had selected Isaiah Austin out of Baylor to a large smattering of cheers from the crowd.
Earlier that week during a physical, Austin learn he suffered from Marfat syndrome, a disease that affects the heart. Austin, who had worked hard to become drafted, career was suddenly over.
Austin hasn’t been a stranger to adversity. During high school, he was hit in his eye which detached his retina. He had to had multiple surgeries and a prosthesis put in which left him legally blind in one eye. Despite this he went on to have a successful career at Baylor.
His coach, Scott Drew offered him a position on his staff.
“I have a whole life ahead of me,” Austin sai 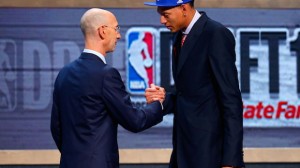 d about the setback. “I’m not going to sit here and I’m not going to sulk about not being able to play basketball anymore, because I can still be involved with the game somehow or some way.”

Police shot a man outside a Walmart in North East, Maryland

Chris Brown gets dumped by Karrueche