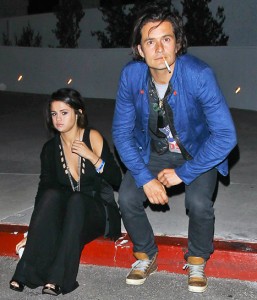 The entertainment news world is swirling with rumors that Orlando Bloom, 37, and Selena Gomez, 21,

are dating. But is this just gossip fodder or something more serious?

concert. According to sources, as soon as they were photographed, each party left quickly. While the

two stars arrived and left the event together, this is the first time that the two have been spotted

together. Sources, and Instagram photos, reveal that Gomez and her girlfriends went out for dinner with

a larger group before the show. Orlando was a part of the larger group, and although Orlando shares a

manager with Selena, sources insist that the two don’t know each other that well. In fact, a close source

insists that, “They are not dating….(the two stars) were there with a bunch of people.”

At a We Day California event, Gomez posted a photo to Instagram of her getting cozy with Bloom, in

a group shot with Seth Rogen and others. This event was apparently the first time the two met, as

Recently, both Orlando and Selena have split form their former flames. Orlando is in the midst of a

boyfriend and pop bad boy, Justin Bieber, are not so friendly. The rumors of Selena and Orlando possibly

Victoria’s Secret fashion show in 2012. While some speculate that this is a case of “revenge screwing”,

as of now neither Selena or Orlando have confirmed or denied a relationship yet. In fact, a source

shared that Selena, “…is not interested in (Orlando)” as anything more than a friend. We will have to

wait to see what the future holds for this relationship!

Ms Jenner Growing Up Getting Tattoos

Beyonce Short Film Yours Is Mine

Tinashe Has Her Tongue Measured on Hot 97