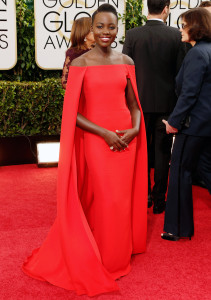 Lupita Nyong’o not only won an Academy Award for supporting actress in her role in “12 Years of Slave” but she has won the hearts of many fashion designers. Pegged the new IT girl, Lupita Nyong’o has turned many heads, as she slays all carpet appearances in the best gowns. Landing a Vogue cover, a Miu Miu campaign, a cover for New York Magazine’s fashion issue, and landing a front row seat during Paris Fashion Week to name a few.

Unafraid of color, Lupita has walked all carpets in daring colors, neck lines, and multiple styles complimenting her dark skin in the best possible way. She has become one of the best fashion muses of 2014 who’s able to make couture work for her; as she doesn’t allow a beautiful dress to wear her.

Taking all red carpets, award shows and special appearances by storm with her fashion, the only question left is: Where does Lupita go from here? And what’s her next fashion surprise going to be?