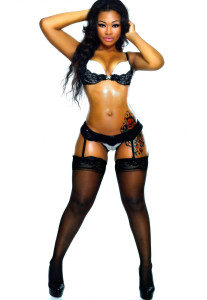 boyfriend’s death in Houston in December.

Blaze, whose real name was Jzapal Jackson, fled initial inquiries about the murder that

happened outside of NOX nightclub, to travel to Houston to avoid persecution. A texas

forced them to separate her from them.

Blaze has been known for her buxom backside and her fiery temper. She got involved

recently with a war of words with “Love and Hip Hop’s”, Erica Mena after Mena sent a shot

her with about her association with co-star Rich Dollaz. Mena also escalated the beef by

talking about the lover in question’s death.

husband’s infidelity had something to do with Jackson’s friend.