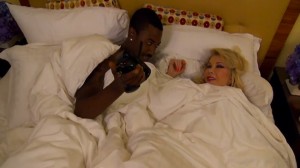 In this week’s Entertainment News, TV personality/comedian Joan Rivers and rapper/R&B singer Ray J have parodied the 2007 sex tape that has made Kim Kardashian famous. The funny, yet rude spoof was made to promote the new season of WE TV’s “Joan & Melissa: Joan Knows Best.”

In the video, after doing some “freaky things” under the sheets, Ray J tells Joan that she is twice the woman Kim Kardashian was, to which Joan responds, “No, she was 32 at the time. I’m three times the woman.” Afterward, the two sit down for an “interview,” in which they talk about the benefits of a relationship between an older woman and a younger man. Can the exchange between the two be even more awkward to watch? Ray J clearly is trying everything he can to keep relevant in the entertainment world; including continuing to cause drama and drag the Kardashian name.

Be sure to check out Ray J & Joan Rivers’ humorous yet awkward teaser.

Drug policy change for Baseball close to being finalized:

Oprah Winfrey to tour the US in the Fall