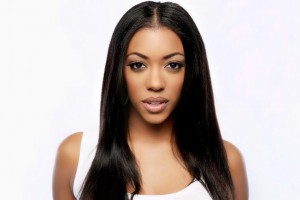 There has always been drama in Bravo TV’s reality “The Real Housewives of Atlanta”,

a full-on fight! US Weekly reported that according to witnesses Porsha stood up, followed by

Kenya and pulled her hair. The brief but nasty fight was stopped by Andy Cohen and

producers who jumped in, followed by the security and ended it in a matter of seconds.

me a beard and she was trying to call Kordell gay. I’ve never called Kordell gay,” Stewart

says. “If [Kenya] has a problem with him being gay, if she thinks he’s gay, she should take

that up with him instead of running around and calling me a beard. When I was married, I

loved him deeply. I was a wife to him. That’s what I was in that relationship”. Porsha adds that

the former Miss USA “should never talk about marriage . . . She’ll have to correct a lot of

things before that [a husband] ever happens for her.”

problems for costar Phaedra Parks, mentioning an inappropriate chat with of Kenya with

Phaedra’s husband Apolla Nida during a group trip to Mexico.

Stewart and Moore have been fighting for years. Back in November 2012, Moore

called then-newcomer Stewart “naive” and “heifer”, minutes after meeting her in Season 5.

The ladies are physically fine after the brawl, but are definitely delivering a must-see

reality TV time for some and… high ratings for the show!

Watch the full video of Porsha Stewart’s interview for US Weekly below:

Oprah Has Her Own Bra Handler!