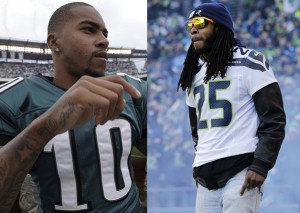 his two cents on DeSean Jackson recent release from the Philadelphia Eagles due to alleged gang ties.

Speaking in an essay on TheMMQB.com, Sherman let the world know that he thought the Eagles had a

double standard conduct toward Jackson and the treatment of Riley Cooper.

Cooper you might remember, left a viral racist sendoff at a country music event that put the Eagles in an

awkward position. They charged him with an undisclosed fined and sent him to sensitivity training and

at the end of the year rewarded him with a contract. Richard Sherman took notice.

“The Seattle Seahawks get it. The Philadelphia Eagles apparently do not,” Sherman scribed. “This

offseason they re-signed a player who was caught on video screaming, ‘I will fight every n—– here.’

He was representing the Philadelphia Eagles when he said it, because, of course, everything we do is

reflective of the organization. But what did they do to Riley Cooper, who, if he’s not a racist, at least

has ‘ties’ to racist activity? They fined him and sent him to counseling. No suspension necessary for

Cooper and no punishment from the NFL, despite its new interest in policing our use of the N-word on

the field. Riley instead got a few days off from training camp and a nice contract in the offseason, too.”

James Franco tries to meet up with teen on Instagram