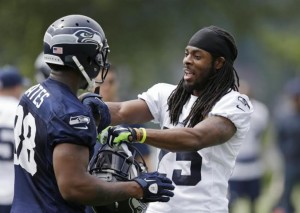 Seattle Seahawks. He has graced the cover of Madden, been in various commercials and been

a recurring guest on ESPN’s first take. Now that Seattle has started it’s offseason program he

can add a new title to his ever growing resume:pugilist.

wide receiver and cornerback drill. The whole team got involved leading to a verbal altercation

between Sherman and wide receiver Doug Baldwin standing up for their respective sides.

themselves for the first time against veterans