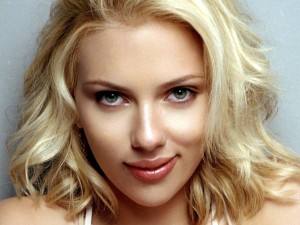 It’s official! Scarlett Johansson in one hot mama…to-be! The 29-year-old star hit the streets of Paris with her fiancé Romain Dauriac this week. The soon-to-be parents rode around Paris on a scooter, before ScarJo stopped to do some shopping on her on Paris’ Turenne Street. This was the first time the couple was seen out since it was revealed they are expecting.
Johansson, who divorced Ryan Reynolds in July 2011 after nearly three years of marriage, seems ecstatic with her whirlwind romance with Dauriac. The happy duo went public with their relationship in November 2012, shortly followingJohansson’s one year relationship with Nate Naylor. The excitedcouple announced their engagement nearly six months ago after her French journalist beau popped the question with a gorgeous, vintage Art Deco engagement ring. Johansson first revealed the ring in September at the Venice Film Festival, with her rep gushing that the couple was “very happy,” but “haven’t chosen a date for the wedding.” In fact, during an appearance on Good Morning America in mid-January, the blond bombshell smiled as she mentioned, “I’m not doing any wedding planning.” And while her nuptials appear to be further down the road, the star admitted in the interview that she did want children.
That wasn’t the first time Johansson mentioned children, either. In December 2013, she told Daily Mail, “I would like to have my own family, that would be nice. They say it’s never the right time and I am sure that’s true, but I think you have to plan it like anything else.” As a busy actress, Johansson knows the importance of balancing her personal and professional lives, “At some point it is something I look forward to. I am fortunate in that I have had a long career- 20 years- that has been very diverse. So, you know, picking a time to plan a family feels like something that I could do and not feel as though I was missing out”.
This was a noticeable change in heart from an actress who had stated in Elle U.K.’s December 2012 edition, “I’m not having kids anytime soon. I’m in a nice relationship, I’m working a lot and, like I said, it’s not important to me.”
Johansson, who is due in August, has been busy at work and she is currently preparing for a promotional tour for Captain America: The Winter Soldier. Once the tour is over, she is expected to begin shooting for Avengers 2.
While the couple is very excited about the pregnancy, it may be pretty tough to cover ScarJo’s growing baby bump under the skin-tight catsuit she is expected to wear for the superhero sequel. According to an insider, “They’re going to fast-track her scenes.” The film is expected to begin shooting on April 5 at an overseas location, as of now the studio has not yet commented on rescheduling Johansson’s scenes.
With so much happening in so little time, it is certainly anexciting year for ScarJo and her hubby-to-be. Congratulations to the happy couple!

No it ain’t the Oscars!