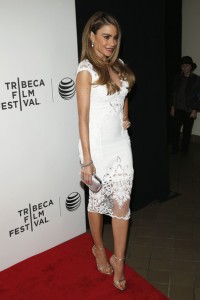 Sofia Vergara attended the 214 Tribeca Film Fest for the premiere of her latest film ‘Chef’. She was wearing a beautiful mid-length white dress. The stunning Columbian celebrity, aged 41, was joined by Jon Fevreau, at BMCC Tribeca PAC.

Coming soon is her other new film, called Fading Gigalo, which she promoted in the Big Apple.

Arctic Swell – Surfing the Ends of the Earth

The Ultimate Burger with Dennis Prescott