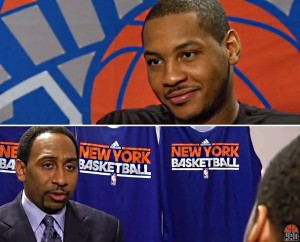 As the NBA season winds down, one question has remained all-season: Where will Carmelo Anthony

end up? According to Stephen A. Smith, that destination will not be the New York Knicks.

fact that with the Knicks being severely over the salary cap, they cannot improve the team much in the

He also indicated Knicks ownership as being detrimental to a winning culture. Smith points fingers that

the company’s media policy is more important to the team than actual winning.

Anthony is having a phenomenal year despite his team’s lack of success. He is second in the league in

scoring at 28 points per game and is one of the top 25 rebounders in the NBA averaging 8.3 per game.

Anthony can opt out of his contract this year or he can opt in and become a free agent next season.