TLC, Rihanna involved in war of words over the weekend 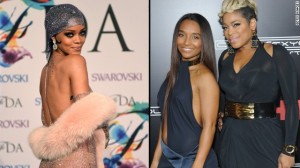 divas, for overtly using sex as a primary way to sell records. The seemingly singled out Rihanna in a

on and that says a lot.”

Rihanna not to be outdone by the prestigious girl group, clapped back by making a revealing photo of

TLC her header and tweeted “PH*** what an OLD THOT has to say”.

media. She claimed she never gave the impression she was talking about Rihanna or her likeness in the

video. In her tweet, she says clearly that she likes the Barbadian beauty and that she is still going to

speak her mind but she wants the journalist who cover what she says to get it right.