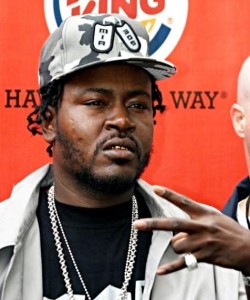 Miami-Dade County rapper Trick Daddy, who is famous for such hits as “Nann” and “Let’s Go”, was

arrested at his home on cocaine and gun charges. The rapper whose real name is Maurice Young, is

subject to laws which state a convicted felon such as himself cannot be in possession of a gun.

could bring dogs outside the home to sniff with dogs. Trick was approached by police as he pulled up to

inside his home and initially signed a warrant for them to search the premises. He soon rescinded that

Young was arrested after a gun was found under a pillow in the house. He was held and released after