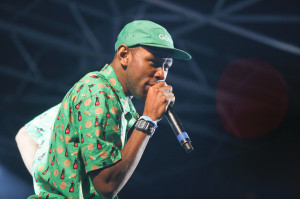 Tyler the Creator is mostly known for his odd performances but this one takes the cake.

Hours after being arrested for inciting a riot, the rapper whose real name is Tyler Gregory

Okonma performed in front of a sold out crown in the House of Blues in Dallas.

through vending lines at a complex that was already past full capacity.

“All you outside the gates; y’all push through,” Okonma screamed, according to the Austin

Police Department arrest affidavit. “Y’all push through. Get in, come on.

Police arrested the 23 year old rapper and later released him on a $25,000 bond.Police

Austin. The video demonstrates a situation that was way out of control and a woman who

was saved by a bartender who prevented injury.

The rapper apologized to police and expressed remorse for the incident. It also was

reported that the bartender was punched in the middle of the melee.

Rihanna and Drake officially a couple

Noel Gallagher — I Wrote My Best Lyrics When I Was High