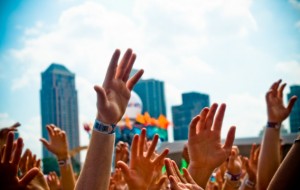 The Ultra Music Festival of 2014 was kicked off in Miami (Florida) recently, and for once, the crowds gladly

gave the sun-kissed beaches of the region the miss. The Bayfront Park Amphitheater was the scene of the

Festival that drew more than 60 artists from various musical genres. DJ Carl Cox, The Chainsmokers who have

a reputation of consistently churning out hits that go viral in no time at all, EDM master Zedd, and psychedelic

rocker MGMT were the stars of this year’s show.

The Performers and Performances at the Ultra Music Festival 2014

there throughout the duration of the shows. For instance, DJ Tiësto invited the Icona Pop ladies alongside him

on the stage on the opening day of the festival. They performed their foot-tapping number Let’s Go. Friday

of his Grammy-nominated album, Atmosphere, in last year’s edition of the Ultra.

The Ultra Music Festival draws the world’s best electronic music talents, and this year was no exception. Eric

Prydz wowed the crowds with his visually stunning stage composed of LED screens and dazzling holograms.

rocking and swinging time. Seven stages had come up in this year’s festival, and the UMF Radio stage, nestled

snugly beneath a hillock of palm trees, was the scene for some foot-tapping bass music. Crizzly and 12th

wooed the crowds with their brands of music and set the scene for a gala time.

frenzied mode with their pulsating tunes and electrifying music.

This year’s Ultra Music Festival will also be remembered by fans for the performance by Basement Jaxx. It

has been almost a decade since this post-breakbeat outfit from the U.K. tasted success with their numbers.

They performed their famous numbers Jump n’ Shout and Where’s Your Head At? In this year’s Ultra and had

the crowds roaring with delight. Their performance won the hearts of their loyal fans who had all along been

with the band. Kudos to the organizers of the Ultra for making the event memorable!

10 unsolved mysteries of the brain