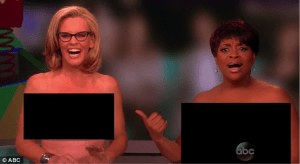 The View hosts Jenny McCarthy and Sherri Shepherd shocked audiences on Monday by going topless. The two hosts joked about the stunt simply being a ploy to boost ratings, and said they got the idea from Girls star Lena Dunham. While the two hosts came on screen wearing black sleeveless tops, they quickly disrobed, “Thank you, thank you!” McCarthy exclaimed as the crowd cheered wildly.
“Apparently not everybody has body image issues because Lena Dunham took her nudity to new levels on the new episode of Girls where she strapped on some lingerie that let it all hang out”, stated Shepherd before showing a clip from the latest episode of HBO’s Girls. After showing the clip, Shepherd, 46, explained, “You know Lena, she gets press every week for being naked. So we’re jumping on the bandwagon.” The ladies were discussing the Girls episode in which Dunham’s character attempts to get her boyfriend’s attention by wearing provocative lingerie. However, unlike the HBO series, Shepherd and McCarthy were covered by black boxes, however they still left plenty to the imagination!
Blond bombshell, McCarthy agreed. “It’s true. We want more ratings, too. Take a little time to enjoy our view!” While the hosts joked about ratings, it appears that the show doesn’t need nudity to attract viewers. Since the departure of Elisabeth Hasselbeck and Joy Behar, and the debut of McCarthy, the show has only experience minor dips in ratings and the show’s current ratings are the same as they were last season.
The ladies got plenty of cheers from the audience and continued to joke about the pair of black boxes that were covering their chests. Shepherd said to McCarthy, “Wait a minute. Look at my box. Why is my big black box so much bigger than yours?” McCarthy was censored just around her breast area, with her shoulders and midriff exposed, however Shepherd’s box covered her completely from the breasts down.
While this seems to be a onetime thing for the ladies on The View, at least for now, Dunham, 27, defended her nude scenes earlier this year at a TCA panel. At the panel, a male reporter said he, “didn’t get the purpose of all the nudity on the show by you particularly…Your character is often naked just at random times for not reason.” Dunham replied, “It’s a realistic expression of what it’s like to be alive, I think, and I totally get it. If you’re not into me, that’s your problem, and you’re going to have to kind of work that out with whatever professionals you’ve hired.”