Are Robert Pattinson and Katy Perry More than Friends? 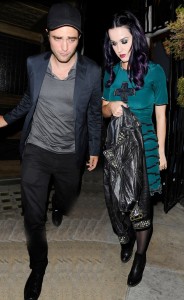 Roar singer Katy Perry and Twilight star Robert Pattinson are the latest celebrity couple in the making! Both are

over with on-now off-again girlfriend Kristen Stewart, his co-star from Twilight. Moreover, Perry and Pattinson

are old buddies who never quite lost touch through the years.

According to some sources in Hollywood, they are both done with philandering men (John Mayer’s

friendship to the next level. But right now, the reel star and the pop star are choosing to keep mum on the status

Katy Perry and Robert Pattinson: Tracing the Rumors about their Romantic Hook-Up

video of the two emerged and went viral on the Internet. The video showed Katy Perry sitting and swaying on

Pattinson’s lap, and both were singing I’ll Make Love to You by Boyz II Men. The video understandably led to

tongues wagging, and there was no dearth of people wondering if Perry and Pattinson were more than just good

According to insiders and sources close to both the stars, Robert Pattinson gave Katy Perry a shoulder to cry on

when she split from John Mayer at the start of 2014. Katy Perry has also been quoted as saying that she finds

that because back then when they were a pair, Pattinson managed to bring on the smiles even on an otherwise

Both Katy Perry and Robert Pattinson choose to keep their affair under wraps. But it is believed that the

American songstress has planned a trip to meet her “friend” when he is away filming in Toronto for Life.

They already regularly text one another, and Katy is believed to be particularly fond of texting him when she

is drunk. According to sources close to the stars, the messages are flirtatious in nature. Now if this does not

confirm the rumors of a hook-up between them, then what will?

Let’s not forget one thing about Kristen Stewart, she played an excellent little boy in Panic Room. She fooled

most people who watched the movie.

Jay Z and Beyonce Welcome the Duke and Duchess of Cambridge to Brooklyn!

Boosie Badazz on Leaving Prison: Everything Was Like The Jetsons

Will Ferrell Is Little Debbie

Dwayne Bowe suspended in week 1 from the NFL